Share All sharing options for: Countdown to Tipoff: Eric Hayes 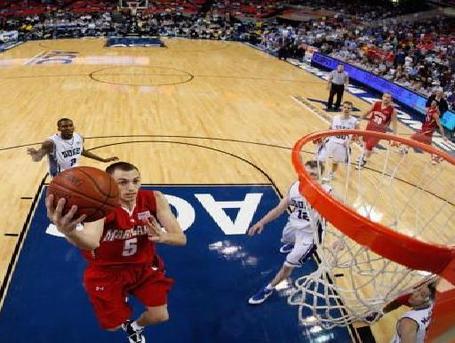 As we close in on basketball season, we here at Testudo Times will be previewing the team player-by-player, starting with the freshmen and working our way up to the seniors. We'll be closing it up November 13 (that is, Maryland's first game) with the final player preview plus a full team preview. Check out our previous previews:  Ersin Levent/David Pearman, Sean Mosley, Jin Soo Choi, Steve Goins, Jordan Williams, James Padgett, Adrian Bowie and Landon Milbourne.

Today we also look at senior point guard Eric Hayes (Hayes was suppose to be posted yesterday, but I forgot to do so). Does everyone remember when Eric Hayes was suppose to be the new Steve Blake? He even looked just like him!  That was probably an unfair expectation to put onto Hayes, so while he hasn't put up Steve Blake Numbers in his career, he's still been a great player and filled a huge point guard void that was in the Terps basketball program at the time. What can we expect from Hayes in his senior year? Hayes asserting himself as the offensive scorer that he can be while also running the show on offense could mean good things for the Terps.

Hayes' scoring ability I think is often times underappreciated, resulting from him not being confident in his ability to score. Hayes is one of, if not the best, free throw shooter for the Terps, so if he could drive to the hoop and draw contact, he could up his  10.3 ppg average from last season.  Hayes can shoot the 3 ball, has great form on his jump shot and can take passes to the basket and also drive to the hoop when an average defender is guarding him. Hayes is also a good floor general. He is good at getting the ball to an open man and normally won't take some of the risks that Vasquez will when he's at the helm. As we know, that can be good and bad.

Hayes is still recovering from a turf toe injury, which is actually something that can linger for a while. He claims he's good to go though. Hayes was challenged some last year by freshman (now sophomore) Sean Mosley and by Adrien Bowie.  Hayes actually lost his starting job to Bowie about half way through the season but his role as the first guy off the bench seemed to make Hayes work harder and insert himself as a bigger scoring threat. Hayes started during the exhibition game last week but whether coming off the bench or starting, Hayes is a valuable player the Terps need to have on the court.

I think, so long as his turf toe doesn't bother him, this will be a good season for Hayes. I think he'll be one of the go to options for 3 pointers, assuming again his toe is fine and he can get open, and will also be more of a presence around the basket in terms of slashing to the basket on backdoor cuts. It will be interesting to see how the renued inside presence will affect what Hayes and the other guards can do. If Padgett and Jordan Williams play well inside and are a scoring threat, that could open up some inside-out opportunities for Hayes. I'd also expect Hayes to have an improved assist to turnover ration, hopefull above 2.

Here is what we can expect from Hayes:

What do you think? Let us know.