Maryland's Defense Turning It Around

Share All sharing options for: Maryland's Defense Turning It Around

There were high expectations for Don Brown's defense in College Park this August. The new DC and former UMASS HC was planning to install an aggressive, attacking defense, and early reports indicated that it would be stifling. After suffering through the Chris Cosh defenses, this looked to be a breath of fresh air.

That is, until we actually saw the defense. They gave up 542 yards and 50+ points to Cal, then 417 to lowly JMU. To round out the trio of poor games, they were gashed by Middle Tennessee State for 438 yards. Through all of this, they only managed two turnovers, both of which were Cam Chism interceptions.

Then, something changed. Until the final seven plays, Maryland's defense shut down Rutgers - a team without their starting QB, admittedly, but surely not much worse than JMU, if at all worse. Even with two very long late TD runs, they only gave up 249 yards total.

Again today, Maryland's defense looked solid against C.J. Spiller, whom many onlookers call the most explosive player in the ACC, and the rest of the Clemson offense, which put up 27 points against a solid GT defense. They held them to just 14 points and 274 yards, a very admirable performance. On top that, they forced three turnovers, which is as many as they had the last four games.

While we don't know this for sure, it's highly likely that those first three games were simply adjusting to the new defense. Only so much progress can be made in practice; playing other teams presents a real shock. Shaking out the roster to find the best rotation takes time, too, and that took it's toll in those first games. Against Rutgers, they seemed to find the right rotation and got comfortable with the new look. That improvement continued today. If you're wondering what that improvement looks like, here it is in graph form: 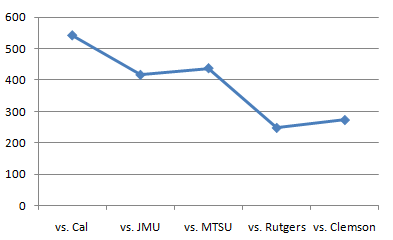 Much was made of Maryland's standing in the NCAA in total defense, which was scary bad (103rd in the nation), and to an extent, there should've been. But, not counting those rough three games, Maryland would be 18th in total defense in the country. That's right: the past two games, Maryland has had a top 20 defense. Rutgers isn't great, but they aren't JMU, and Clemson is a quality opponent; this is real, tangible improvement.

Of course, you can't just strike those games from the record, which is sad for Maryland's defense. But the past two games are revealing that, maybe, just maybe, this win - which was won on the back of the defense - isn't a fluke.

Strangely, Demetrius Hartsfield mirrors this defensive improvement. The freshman linebacker looked out of place against Cal. He missed a few huge tackles against JMU. He was unable to contain Dwight Dasher against MTSU.

Then, against Rutgers, he was second on the team in tackles and looked solid. Today, he led the team in tackles, had two tackles for loss, and made the incredible game-winning sack, fumble forced, and fumble recovery. Expect him to be a force the rest of the year, right along with Maryland's defense.