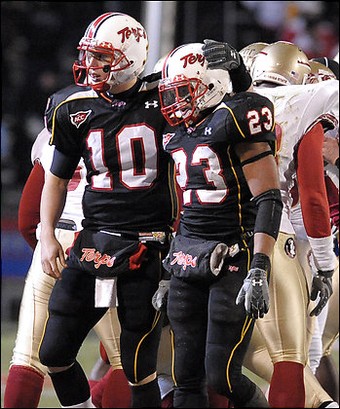 In what can only be described as an absurdly early look at UMD football next year, Testudo Times will take a look at what the 2009 football season might look like for the Terps. And we start in the backfield.

Quarterback is a rather locked down position for Maryland, with two-year starter Chris Turner entering his senior year. Behind him will be fellow senior Josh Portis, and behind him is redshirt sophomore Jamaar Robinson. This'll be the first year in - what, six? - that we don't have to worry about Jordan Steffy possibly being inserted into the lineup at a random moment. I've said it before: He was a great Terp, and he's extremely likable, but he's a mediocre QB.

There's some rumors that Portis may end up transferring to a DIA or DII school (James Madison is one name that's popped up), especially because his playing time dropped significantly in the latter stages of the season. I don't think so, though - I see him staying at Maryland for his final year. I have no reasoning for this - just a hunch. I can also see him getting quite a bit more playing time; he's obviously talented enough to help the offense.

Check out the rest after the jump.

Running back is the team's strongest position, and will be for awhile. All-ACC running back Da'Rel Scott will return for his junior year, fully healthy (finally). The #2 back will be a battle between sophomore Davin Meggett, who was absolutely outstanding as a true freshman this year, and junior Morgan Green, who's supposedly starting to impress coaches in practices. Don't forget about redshirt freshman Gary Douglas, though - he's pretty talented, I could see him playing in at least one package. Expect to see a lot of run plays with the running backs as skilled as they are.

Maryland does also have a few talented running backs on their way in, namely Caleb Porzel and DJ Adams, but with the depth at the position, one would expect they'd have to redshirted.

Fullback is yet another strength for Maryland. Three-year starter Corey Jackson will return for his senior season, and he's one of the better fullbacks in the ACC. He's a great lead blocker, and he's a good enough runner and receiver out of the backfield to not be a liability. Haroon Brown and Taylor Watson are also there behind him, and both are servicable backups.