Share All sharing options for: Terps Football Next Year: Wideouts and Tight Ends 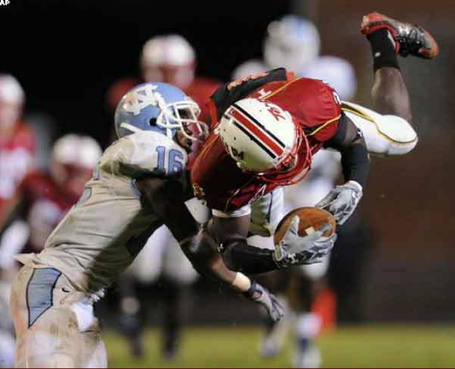 Hopefully, this post is slightly less extremely too early than the last one.

The strength of Maryland next year, along with the running backs, will be the wide receivers. Despite the loss of Darrius Heyward-Bey, the group remains extremely strong, and should actually improve due to the experienced gained by the starters-to-be during this season. Yes, the position has a huge amount of depth as well.

At WR-X, Torrey Smith returns, and I for one am very excited. Smith had a phenomal season last year as a true freshman, and it should only get better as he gets more acclimated to the college game. He's a great blend of size, reliability, and speed. He should easily be the top target for Chris Turner next year - I expect big things from him.

Behind him is Emani Lee-Odai, who also had somewhat of a breakout year. Much like Smith, he's a reliable target who should see a lot of balls thrown his way. I expect Kerry Boykins to end up at 3rd string at WR-X, and he'll see minimal playing time. That's not an indicator of his talent - he's one of the more purely talented WRs Maryland's had in a long time, as are Kenny Tate and Kevin Dorsey - but more an indicator of the strength of the position.

Next up is WR-Y, or the slot receiver. Ronnie Tyler has the early lead there, and it's well deserved. Remember his catch against UNC? If not, look up a few inches. He can make some incredible catches and is dangerous without the ball, though he's not the most consistent player on the team He's the best big play threat on the team. Adrian Cannon, who made a huge play in the bowl game, is behind him, though he's mostly inexperienced. Kevin Dorsey rounds out the trio, but he may push Cannon for playing time in the spring.

LaQuan Williams returns to the team as the likely starter at WR-Z. He broke against Rutgers two years ago, and was one of the more promising players going into 2008. He was injured early in the year, though, and saw very little playing time in the season. He has great hands, and though he's not the great athlete, isn't deficient when it comes to speed and agility. Tony Logan, the #2 at that position, has great speed, quickness, and agility. Unfortunately, he's a bit on the small side, and is inexperienced when it comes to playing WR. Quentin McCree will battle Logan for the #2 spot, and very well may beat him out. McCree is a tall, lanky possession threat, who I remember dominating in NCAA Football 09 in Dynasty Mode in 2010, for what's that worth.

Tight end is a traditional strong suit for Maryland - Vernon Davis, Jason Goode, Joey Haynos, and Dan Gronkowski were all very good for the Terps. Next year should be no different - Lansford Watson looks to inherit the starting spot from Gronk, and I expect him to exceed both Gronkowski and Haynos's performances - and that's a tall task. Watson was a 5-star wide receiver in high school, but Ralph converted him to TE, and he shows great promise. He was a bit quiet, but when given opportunities, he made a few big plays last year.

He's mostly backed up by Tommy Galt, who started seeing significant playing time late in the year. Galt is a great blocker, but has some trouble when it comes time to catch the ball and run routes. He simply doesn't have the athleticism to get open consistently, but he's a wonderful power TE. Matt Furstenberg and Devonte Campbell will battle for the third spot, and if I had to bet, I'd put my money on Furst. He actually saw a bit of playing time last year as a true freshman, which means the coaching staff likes him. He's a very balanced, traditional tight end, while Campbell tends to be a bit more of an H-Back. Drew Gloster could end up here, but he moved to linebacker last year, and I expect he'll stay there.

Clearly, Maryland has a huge amount of depth at these positions, and it will only get better in the future. But right now, all of these positions are young. The starting wide receivers have never actually started a game in their career, and neither has Watson. They're very strong on paper and very talented, but whether they can put it all together is another matter entirely. Surely, all the pieces are there, but it's a bit early to expect them to be a bona fide receiver group.