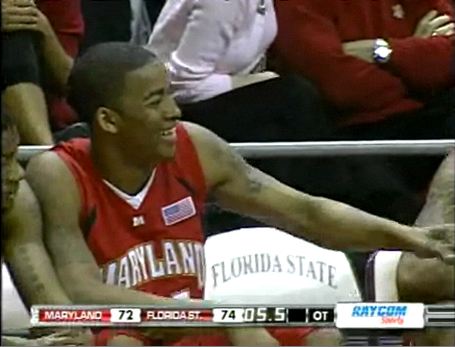 Case in point: Maryland's down 2, there's 5.5 seconds left in overtime, and Maryland just fouled Toney Douglass, sending FSU to the line in what would decide the game. The game very well might define Maryland's entire season.

The camera cuts to the Florida State bench. The players on the edge of their seats, anxiously awaiting the fate of the free throws. The camera then cuts over to Maryland. Instead of nervous glances, or sad faces, you see Braxton Dupree and Cliff Tucker happily chatting. Braxton makes a joke, Cliff laughs.

I haven't been able to find a video (or a decent screen grab utility for Mac) so there's no video evidence for those who didn't see it, but you can see it in the pic above. At least David Pearman, who didn't play at all, looked like his dog just died. These guys actually went out, contributed to the comeback (well, Cliff did) and still didn't care.

Tucker was the one who, if you remember, nearly transferred at the beginning of the year. Braxton is the one who, if you've ever watched a game, can't jump or run. Hey guys: just know that you're not indispensible. When you're playing as poorly as you to are right now, this isn't something I'd want to do.