ACC play starts tomorrow for Maryland, and they'll face off against the Clemson Tigers in Death Valley. It'll be a big game: if the Terps can pull out a win, they could be a serious ACC contender. A loss may set them back to mediocrity. Both teams had trouble early on in the year, but both have bounced back very strongly. It'll be a great game that I'm looking forward to. Here's what you should expect:

A lot of running: Clemson is a team that should rely on their running all game long. Look at the team: not only is there fast as anyone (except Da'Rel Scott, probably) CJ 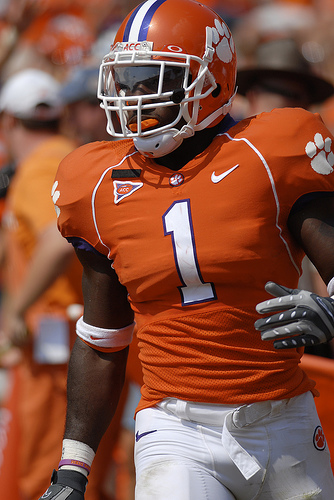 Spiller, butu also powerhouse James Davis. Although, if you didn't know this, I have trouble believing you watch ACC football.

Don't sleep on the passing game: Again, if you watched ACC football last year, you know about QB Cullen Harper. He shocked most of the football world with a great year, and he's been solid so far this year. However, he's made more mistakes then he did last year, (4 interceptions, 3 TDs) so if the Terps are going to win on defense, it'll likely be against the pass.

Strength vs. Strength: If there's been a strength for the Terps defense this year, it's been against the run. Teams are averaging a little over 100 yards per game on the ground: not good, but compared to the passing game? Great. They completely shut down Cal's running game, which was supposed to be maybe the best in the nation. So if the Tigers want to run the ball a lot, the Terps have the guns to make the stops. Not sure if they will, but they're more than capable.

Weakness vs. Weakness: I don't want to call Clemson's passing game a weakness, but I don't think there's one Clemson fan who'd call it a strength. Maryland hasn't been able to contain the passiing game. Teams that are below average have torched the secondary, so I fully expect Clemson to try attacking through the air. But they have to decide how much - do they ignore their much stronger running game and instead focus on the passing game to attack Maryland's weakness?

Not a lot of sacks: Only 6 sacks on the year for Clemson so far, and no player is in the double digits. Maryland, on the other hand, has a few more: 8. Both are below average. With solid offensive lines on both sides (yes, both have a decent amount of problems, but both are better than the defensive lines), I don't expect either QB to be under a lot of pressure.

Freshman featured: Both teams feature a couple of great freshman; defensive end DaQuan Bowers and running back Jamie Harper for Clemson, and Davin Meggett and Kenny Tate for Maryland.

Terps run game: I can't see the offense having too much success against the Clemson pass defense. It's pretty solid, with Michael Hamlin at safety, one of the best in the nation. The run game, however, has a chance to really pick up the slack, with Clemson having lackluster linebacker depth. I fully expect the Terps to use all three running backs tomorrow to run the ball down Clemson's throat, with an occasional play-action pass.

Prediction: I don't like making predictions; always feels like I'm jinxing the team. I definitely think Maryland could surprise Clemson with a win, but I'm not expecting it. If I had to venture a guess on the score: Clemson 24, Maryland 14.