Share All sharing options for: Early Look at Nevada 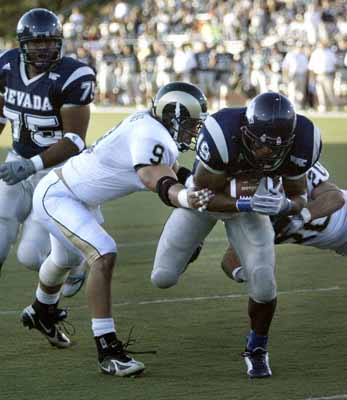 This is simply a statistical analysis, I haven't really looked and researched the roster and their tendancies, just taking a gander at the stats.

Don't be fooled by the lack of national prominence for Nevada. This team is very good. Don't believe take a look below.

Has your position on them changed a little?

Sure, this only the good stuff (more on the bad later) but that doesn't make it any less important or relevant. #2 in the country in rushing? The only team they're behind is Navy, who never passes the ball. The fact that they were that high in the run game and still were able to have a decent passing game is a huge indication of their offensive prowess. They're also great against the run, so don't expect a great game from Da'Rel Scott. They can hold onto the ball, so it'll be important to make sure they don't get a lead. And they can pressure the QB - with the past few OL performances, that's a pretty scary prospect.

It's not all doom and gloom, though. Here are the stats more in MD's favor:

Take a look at passing defense. If you wondered "119? Are there even that many teams?" you were pretty close. There are exactly 119 teams. That means they were the worst team in passing defense in the entire NCAA. Worse than Western Kentucky, Central Michigan, Rice, etc. Really, really bad. Plus, teams can light up the scoreboard big time against them - 31 points a game is a lot. Their starting field position is pretty poor, and they can kill themselves with penalties.

Okay, so there's some really good and some really bad stats there. How do the Terps  stack up?

The most important stats, looking at it, would be rushing defense, rushing offense and passing offense. Those stats? Not too good. Maryland is a pretty bad 74th in the nation in rushing defense, though those numbers are a little skewed due to the Va Tech game and Clemson first half. Rushing offense? 72nd, not much better. Doesn't look like the run game will be much of a factor. Passing offense is a little better, at 65th, but that's still not lighting the world on fire.

On paper, it's not nearly as favorable as one would think. It'll be a heck of a game, and the Terps will definitely need Chris Turner's A-game. Al Seamonson should definitely stack 8 or 9 guys in the box. Otherwise, it may be a pretty embarrassing loss for the program.