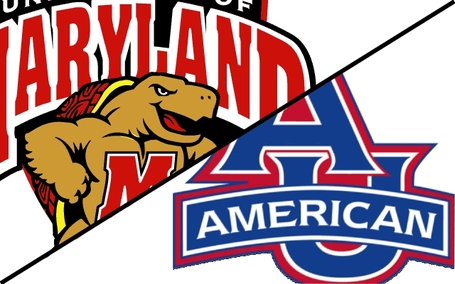 It's been quite a week for me (computer crashed, installed Linux...very busy) but hopefully all that will be forgetten now that Maryland basketball has returned. I'm extremely excited, because the more I think about it, the more I like this team. But more on that later: here's the stats for American:

I don't need to remind you about last year's disappointment. But I did look at the rosters between the two, and what's changed. For American, 3 of last year's starting 5 return this year. Unfortunately, the three returning starters (Garrison Carr, Bryce Simon, and Derrick Mercer) were the three best players from last year's team, and a fourth player (Brian Gilmore), who came off the bench last year but actually played more than the other two starters, is also back. This American team is better than they were last year, so they're obviously capable of beating Maryland.

While American got better on paper, Maryland has seemingly gotten worse. They have no post presence, and made no significant additions. But there's two things there: 1) every single player improved significantly on Maryland 2) the two players Maryland lost (Gist and Osby) contributed a whopping three (that's 3) whole points against American last year. Try as they might, I don't think this year's post players could do much worse.

Let's face it, last year was an aberration. Maryland was, and still is, a better team than American. Unless there's some shocking development or the team comes out as flat as they did last year, I expect a (somewhat) easy for Maryland today - 76-60.