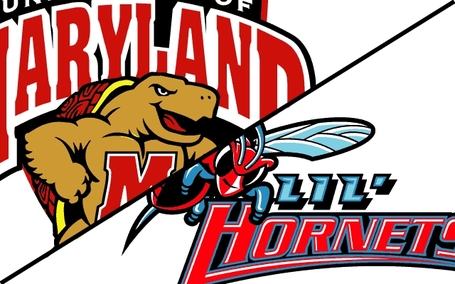 Maryland takes on Delaware State tonight, in a game that will *hopefully* be relatively one-sided. Unfortunately, this team has a propensity to lose games they shouldn't, so don't be utterly shocked if Del. St. comes out stronger than expected.Notice I didn't say Maryland would lose - not to sound overconfident, but Delaware State is 2-10 on the year so far, with the wins coming over Wilmington University and UMES. I have trouble fathoming a loss for the team.

A few things to look out for tonight:

Who replaces the minutes Jerome Burney provided? Granted, he only provided about 17 of them in the past two games, but those 17 minutes can get spread around in a variety of ways. My guess is that Braxton begins seeing a few more minutes, Goins sees a couple of them, and JSK gets the rest.

Can Landon Milbourne keep it up? He better. It's safe to say the past few games were breakout games for Milbourne, and if he has truly arrived, then Delaware State better not stop him. If he has a down game, his inconsistency and disappearing act may return.

Who's in the starting five? The five could change game to game. My guess this week is: Vaz, Hayes, Bowie, Milbourne, Neal. So, no changes. If Dino has another great game, I could see him there.