Share All sharing options for: Is Friedgen's Seat Officially Hot? 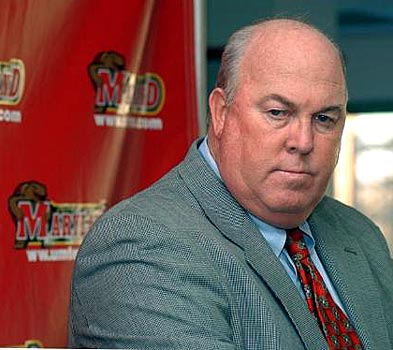 Another year of football in College Park, another year of (relative) mediocrity. Let's take a look at the past five years, shall we?

That right there is four years of complete averageness, with one year of respite thrown in. I'm sorry, and I understand what Ralph Friedgen has done for this program, but it may be time to sit down and take a look at his performance.

(Oh, and if you're wondering how 7-5 is mediocre - 5 of the 7 wins were by one possession. A loss by 34 in a must win game on national TV on senior night surely doesn't help.)

It's a common criticism of Fridge that he won with Vanderlinden's players. It's a cheap criticism, sure, but it's still valid: his most successful years were his first 3 - the ones where Vanderlinden's players were still around. This is almost a reverse analogy - don't let the cook take credit for the meal when he didn't pick the ingredients. Or, at least wait until he does pick the ingredients.

I'm not going to say that Fridge can't recruit at all, or that he's a terrible gameday coach. At the same time, I don't think anyone would argue he's a great coach in recruiting, on gameday, or even in gameplanning.

I've seen two main arguments for keeping him as the head coach: "He's earned it/we owe him" and "Who could do better?". Neither of these make much sense to me - stop living in the past, don't be afraid of the future. To say that he has "earned his keep" based on three solid years of football is ridiculous. College football doesn't work like that - not to use a cliche, but it's "what have you done for me lately." Lately, Friedgen has been mediocre - if that's what the program wants, then I suppose this is fine. But the fans do not want it. They want a good team - and eventually seats will begin to empty. When that time comes, the program will have to take a long, hard look at him.

As for who could do better: well, there's about 15 mid-major coaches itching for a job right now. Kyle Wittingham, Gary Patterson, Bronco Mendenhall, Skip Holtz...there's even more coordinators. To say that no one could do better is asinine - sure, some will do worse, but some will do much better.

I'm not saying that Maryland should fire Friedgen right now. But he is one of the higher paid coaches in the NCAA at the moment - I think Debbie Yow might have to sit down, look at his performance, and ask herself "Is it a $1,750,000 performance?" As I mentioned earlier in the year - a precedent has been set. Another ACC Atlantic team was experiencing mediocre results, and they acted. Friedgen's La-Z-Boy might be getting a little toasty right now.