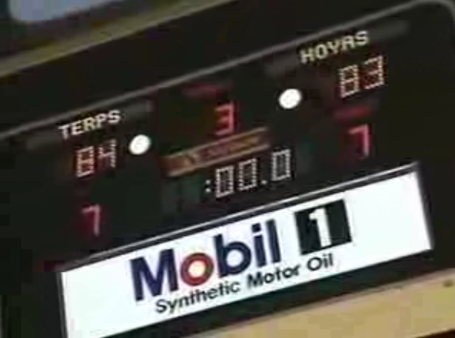 That's right, folks, it happens again. The game on Sunday will certainly be a good one. In case you somehow haven't heard, there's a bit of a rivalry between Georgetown and Maryland. And not a fake rivalry - these schools do not like each other. These coaches really do not like each other. It goes a ways back, but it really got bad after John Thompson began refusing to schedule anyone good or local. It was something he just didn't do (and it got worse after Maryland won the 1993 game in OT), and Gary - obviously - took it as a slight.

Then, when JT's son, John Thompson III, took over at Georgetown, he decided to open it up a bit. The problem with that, though, is that he demanded that if Maryland and Georgetown play, then it must be at GTown's home court in DC. Unfortunately, the last game between the two (see above) was at GTown's home court. Thus, Gary, by the sacred rules of the home-and-home, demands that the game be in College Park. So neither coach is willing to bend on this, and a matchup will seemingly never happen.

But we are saved by chance! If I had to guess, Gary will be insane in the few hours between now and gametime; there is nothing he wants more in the world right now than to beat GTown again. It'll certainly be a fun game if the players are able to embody Gary's emotions, as they often do. I'm ready for it. You?