Share All sharing options for: Maryland Blows Out Michigan State 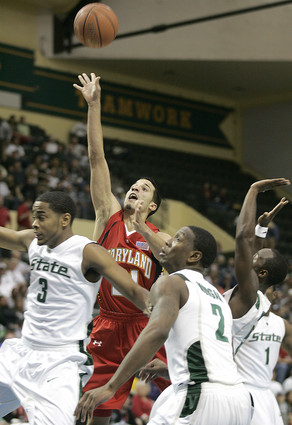 Wow, what a win for the Terps. Maryland out hustled, out executed, and flat out out played Michigan State. The Terps played fantastic defense, had good inside out play, and executed the flex-offense perfectly.  I think Vasquez might need to take a few less shots, but he played well, especially in the 2nd half.

Dave Neal - player of the game. No, that's not Testudtimes naming him that, that is ESPN giving him that honor. Gary described Dave as a YMCA type player, and I couldn't agree more. He was everywhere, he was leading the team on the court, and he played great.

Mosley was awesome - doing a lot of little things, such as jumping for a ball that was going out of bounds under the MSU basket and just throwing it down court to Bowie, who was able to turn it into a bucket. Great play by the freshman.

Bowie did a great job and I'd expect him to keep getting a lot of playing time.

Cliff Tucker never seemed to get involved in the offense and as a result, only played about 7-8 minutes.

Milbourne played well, but still needs to assert himself more.

Dupree had a good game, scoring 7 points, grabbing 6 boards and doing a pretty good job.  He definitely looked like an improved player, so that's a good sign.

Dino Gregory also had a good game, getting up and down the court, hustling for loose balls, and blocking a shot. I think you can also expect to see more of Dino in the coming games.

Interesting that we didn't see Burney, Goins or Kim all game.

The Terps were great in getting out in transition, and very good in getting down the court when Michigan State tried to run, often hustling back down to the other end to block a shot.

Maryland did a great job from beyond the arc, scoring 9 3's on 19 attempts, a lot of those missing coming from Vasquez, who struggled early.

Maryland was out rebounded, but only by 2, which is impressive.

The Terps were also a solid 17-21 from the charity stripe, only turned the ball over 10 times, and had 17 assists, 11 coming from Vasquez and Hayes.

Overall, a great win for the Terps, especially for their RPI.  Lets hope they can keep this up tomorrow.