Terps Out of It

Share All sharing options for: Terps Out of It 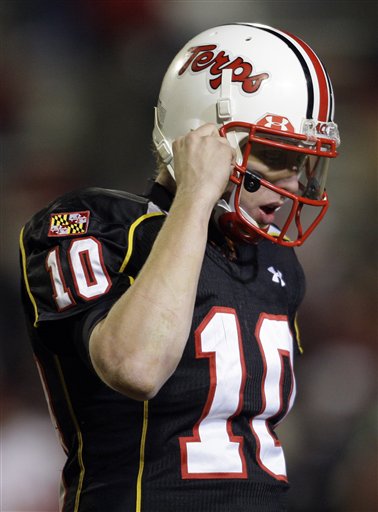 After attending the game, I can't express in words just how disappointed I am with this team. A night game, a blackout, a must-win, senior night...and they give that kind of performance. It was just sad.

One could tell from the beginning it wasn't going to be a good game. Florida State came out pumped up, jumping around, very active. Maryland? Almost somber. Very little energy. That was echoed when the game started.

Chris Turner did not have a good day, obviously. Threw a couple of picks that really hurt. That's not to say he was the biggest culprit - pointing out one player would be hugely incorrect. No one did their job last night. The offensive line is another big one - perhaps Turner would've done better if he wasn't getting whacked every time he stepped back to pass. And the running game - maybe if it was actually a threat, the defense would have to play honestly, and Turner wouldn't be facing a blitz every single down. At halftime, Maryland had one yard rushing. One yard!

Then there's the defense. They did very little all game. It's tough to blame them too much - they could've given up only 6 points and still lost. Not to mention how much they were on the field. But man, there were times when Christian Ponder would run over guys - a quarterback would carry a linebacker. What kind of performance is that?

That brings me to the coaching staff, who maybe were the worst of everyone. Chalk me up as one who doesn't understand James Franklin. Both starting safeties are out for FSU, and yet he decides to go dink-and-dunk for half the game. Darrius Heyward-Bey would consistently get single coverage, yet throwing it deep to him seemed to be taboo. Instead, Franklin thought to get the ball in his hands by screen plays and reverses - I have trouble with that. Another problem - on almost every pass play, Turner would roll out to his right, completely taking away half the field. Instead of covering 53 yards, the defense had to cover 26 yards. That's a substianally less amount of space, which only makes it harder for the QB. Even worse, Meggett played most of his time in the spread, while Scott played more in the 2 TE packages - the exact opposite of what's supposed to happen. The power back goes in the power set, the speed back in the speed set.

Chris Cosh wasn't better. Too often he'd set the defensive back ten yards of the line of scrimmage. This mostly happened in the 1st and 2nd quarters, and FSU saw it - they were able to hit screen plays and short dump offs for seven or eight yards consistently. The middle of the line was the weakest I've seen it in a long time. I don't know if was the players or the scheme, but it wasn't right.

Really, despite the crappy coaching, it comes down the players. Yes, at times Cosh didn't call the right set. But the times Moises Fokou, Jeremey Navarre, Dave Philistin, or Dion Armstron just ran by the guy the ball - usually Ponder - or tried (and failed) to arm tackle him instead of wrap him up...they didn't execute. Same with the offense. Franklin's plan would've worked perfectly had the line actually blocked. It's the players fault foremost, then the coaches for failing to adapt. Just a very, very saddening game.