There has been a lot of other news in sports recently, so I'm dedicating a post to all of the happening of the last week that might be of interest to Terps fans.

On Sunday, the Men's Soccer team captured their third ACC title, defeating UVA 1-0.  The Terps also defeated UNC and 1-0 on their road to the ACC Title. You can read a game recap of the title game here.

The Terps have been selected as the No. 2 seed in the upcoming NCAA Men's Soccer Tournament and will enjoy a first round bye before facing the winner of the George Mason-Penn game. The Terps will play that game on Nov. 25th at 7:00 P.M.at their own Ludwig Field. 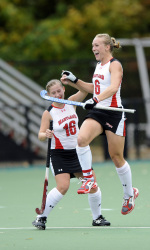 's Women's Field Hockey team has again reached the Final 4 after defeating ACC Rival Duke 8-5 on Sunday at the Field Hockey and Lacrosse Complex in . The Terps will be traveling to next Friday for the NCAA Semifinals. In what is a pretty funny situation, the Terps still don't know who they'll face, as the game between Michigan State and Iowa, of which the Terps will face the winner, had to be suspended due to snow.  You can read a recap of the win over Duke that sent the Terps to the Final 4 here.

In a bit of shocking news, 's Women's basketball team started off the season with a blindsided defeat at TCU on Friday, losing 80-68 on the road. The Lady Terps were able to bounce back from that loss with a 73-46 win over Delaware State on Sunday. I think this team is just trying to find their identity, especially after losing seniors Crystal Langhorne and Laura Harper. They'll bounce back and I'm sure they'll be fine as the season progresses.