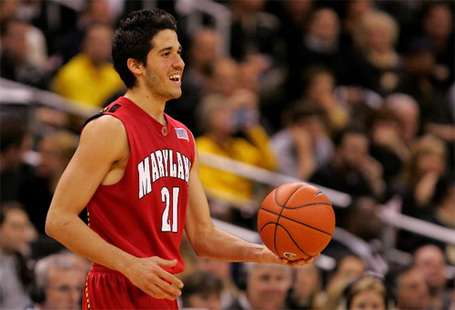 I'm actually leading off with the secondary story, because I can. Greivis Vasquez, our favorite overconfident combo guard, was talking to Don Markus the other day, and made a bit of an unexpected statement (h/t to Tracking the Terps):

People keep talking bad about us, but the last two days I've seen something I've never seen at Maryland, including my freshman year when we went to the tournament. The last two days, I thought we could be a Final Four team.

I'm a little torn. He obviously didn't say that last sentence seriously, but it's a bold statement nonetheless. I also believe this team will be miles better than what the experts - I use this term loosely - are predicting for them. However, I also remember James Franklin's prediction that the Terps would "go undefeated". That didn't exactly happen. It's good to see Vaz taking a stand and being a leader but I wish he would back it up with some consistent play.

Now, onto the other story of the day: Maryland basketball officially kicks off tomorrow! The Terps tipoff against Bucknell tomorrow at 8 pm; unfortunately, there's no TV for the game. It is available on ACC Select for $6, though, so that's an option if you don't mind dropping a few bucks.

As you know by now, the Maryland starting 5 isn't exactly decided yet. Gary's quote on it?

[on who's starting Friday]

Well, that's one way to do it. Really, it showcases the depth this team has. If someone has a bad day, there's someone else their caliber to step right in for them. Again, if Gary can utilize this, this team can make the NCAA tournament.

Here's my prediction for the starting lineup:

I'm not too happy about Dupree, but I'm guessing Gary will put him in simply because he's a "classic center", something that Dino Gregory and Jerome Burney are not. As for a prediction? Maryland 85, Bucknell 70. I don't think the game will be as close as the score, honestly.