Bad news for the Terps.  Various sources, including the Maryland Athletic Department this morning, have confirmed that Kim was denied by the NCAA Clearinghouse. The University is appealing the decision and that will be heard by the NCAA Academics Committee.

We've also learned about why Kim's decision has taken so long for the committee to rule on.  According to Steve Yanda's Terrapin Insider Blog over at the Washington Post, the recent shoulder surgery Kim had performed had to be done in Korea due to insurance reasons. As a result, Kim had to take some classes in Korea while recovering from the surgery and the NCAA hasn't been able to confirm that it was Kim to indeed took and passed these classes.  The University has until Thursday to provide proper documentation that Kim was the person who completed these courses. 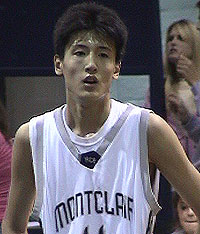 I called into WNST radio on Thursday when Keith Cavanaugh from the Terrapin Times was giving his weekly Maryland updates on football and basketball.  I asked him about Kim's status and he said it was basically the 11th hour/back against the wall time for Kim.  He couldn't remember any circumstances in the past when a decision had been dragged out this long and still had a favorable ruling for the student involved. According to Keith, which contradicts what Steve Yanda is saying on the Washington Post's Terrapin Insider Blog, Kim would simply have to retake the classes in question before becoming eligible to play with Maryland.  Yanda says that Kim would have to leave the University, enroll in a Jr. College, and then re-apply/come back to the Terps.

If this decision is held up, it's devastating news for the Terps, especially Maryland's front court and outside presence, which could really use someone to step up under the basket as well as stretch defenses with the 3-ball. I think Maryland can still do well this year without Kim, but it would be really nice to have an extra body on the roster. Remember though, Kim was originally part of the 2009 recruiting class, but wanted to reclassify for 2008.  I'm not sure if that was really a factor in the NCAA's decision or not, as regardless of whether he committed took part in the 08 or 09 class, the NCAA would still be investigating these classes he took while in Korea.

What do you think about the decision?  Do you think Kim's appeal will result in him being cleared?