So, Who Gets the Blame?

Share All sharing options for: So, Who Gets the Blame?

Yes, it’s the most disappointing loss in the history of Friedgen’s entire tenure at Maryland. I don’t see how anyone can argue otherwise; think about it. Maryland had just beaten Clemson, a ranked team and the best of the ACC, in Clemson. Virginia, on the other hand just got their asses handed to them against Duke by 28 points. This same Duke team just lost to Georgia Tech by 31. And yet, Maryland can’t stop this crappy offense and can’t drive against this anemic defense.

Let’s examine Virginia’s offense for a second. At the start of the year, they lost Jameel Sewell, their starting quarterback, for academic reasons. So they put in Steven Lalich. A couple weeks into the year, he’s off the team for underage drinking…after he told his probation officer voluntarily. So it’s Mike Verica. I’ve never heard of him before this either, but whatever. He threw four interceptions against Duke. Four. Unbelievable. This is completely ignoring their crappy running game, as well.

Now, Maryland goes down to Charlottesville obviously expecting to win. But something went wrong. The offensive line couldn’t block. Chris Turner couldn’t throw the ball. Da’Rel Scott was slower than normal. The defensive line couldn’t penetrate into the backfield. The linebackers were slow. The secondary couldn’t cover. Obi Egekeze missed a stationary ball. It wasn’t moving, and he whiffed. Every single thing that could’ve gone wrong went wrong.

Presumably, I didn’t really need to tell you this. I’m just setting the stage here. Most people blame the players in this situation. You can’t ignore your opponent, you can’t look ahead, because you’ll get caught. It’s not just up to the coaches to get the 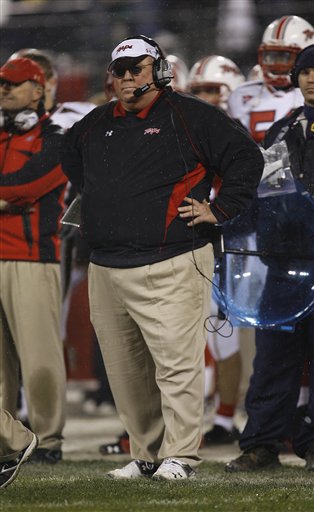 players focused. The coaches should be making attempts, but if the players don’t respond, there’s nothing any coach can do about it. But this is different.

Kevin Barnes commented on this earlier, after the Middle Tennessee State game, and he’s gone back to it now. This team consistently plays down to their competition and up to their competition. The team is good enough to beat Clemson, but when they play MTSU or UVA, they have to make sure to make it close. This has been a recurring theme throughout Ralph Friedgen’s tenure.

Head over to TerrapinStats.com for a minute. Fridge was hired in 2001. 2001 wasn’t a problem – teams worse than them were beaten. 2002 was worse, though not terrible. They were beaten by Notre Dame handily, and lost to a UVA team that really wasn’t that much better than they were. The trouble began in 2003. They lost to Northern Illinois, and it was a disaster. Later in the year, they lost to a Georgia Tech that they were better than. The season, though, wasn’t a failure. In 2004, they really couldn’t play down to any team: almost all were better than them. Still, they were only able to beat Northern Illinois, one of the only teams they should've beaten, by a paltry three points. 2005 was a bit of an anomaly: they beat the teams they were supposed to. Unfortunately, that was a pretty exclusive group. In 2006, the team snuck by just about everyone: Florida International by 4, UVA by 2, NCST by 6. Last year, they lost to UNC in a game they should’ve won. And this year, of course, they lost to MTSU and UVA.

The fundamentals of the team are poor. The coaches can’t coach and motivate unless they feel they have no room for error. The players overlooked Virginia and got killed for it. But don’t worry; they’ll end up beating VT and Wake to end up just a game out of the ACC championship game. And Ralph will do just enough to keep himself from getting fired.