Update: Whoops. Looks like that interview was pretty dated...Hawkins already took an official visit to Maryland, last Saturday. So apparently MGoBlog took awhile to get that interview up. Hawkins will commit tomorrow, hopefully to UMD.

Travis Hawkins, a cornerback from Quince Orchard (Gaithersburg) will announce his college decision on Thursday...well, maybe not. 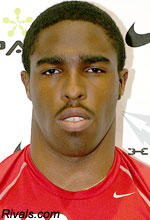 If you're confused, so are we. First, there's a post from Josh Barr, the Washington Post's recruiting blogger, detailing Hawkins' plan to commit somewhere (Barr posits that MD has a great chance) on Thurdsay, according to his coach Dave Mencarini. All is well and good.

That is, until you discover this: an interview from MGoBlog that was posted about 10 hours earlier than Barr. Besides him going nuts over Penn State, there was a more important liittle tidbit:

TOM:   When do you plan on committing?

TRAVIS:   My date was November 3rd, but I'm pushing it back to the first week in December, or if I take a couple more officials, I might just commit where ever I feel comfortable.

Color me confused. Sure, there's a good chance that Hawkins changed his mind within like two hours, but on the off-chance that he didn't, there was a major miscommunication somewhere. Personally, I'm going to guess that Hawkins didn't communicate his decision date well enough to Mencarini.  The time difference is too short for him to have made a commitment in between interview and Barr's call. I'm skeptical of either report, honestly. Let's just see what happens.

Hawkins would be an awesome get for the Terps. He's a high four star, low five star kind of kid. He's the 6th CB in the nation by Scout, 19th by Rivals. He'd be a big reinforcement for a secondary that might be hurting the next few years with a lack of talent.