You've probably been wondering about Kevin Barnes, who got hurt against Wake. He missed part of the second quarter and the second half. Well, the prognosis isn't good.

The news of the day is the cornerback Kevin Barnes is out for the NC State game with a shoulder injury and his status for the coming weeks does not look good. Ralph Friedgen declined to discuss the results of Barnes' MRI exam until tomorrow, after Barnes speaks with doctors.

Now, it could obviously be worse, but it could also be a lot better. Luckily, the Pack's top wideout, Owen Spencer, isn't incredibly talented, but Nolan Carrol is still going to have to be on his game. Same with Anthony Wiseman and Richard Taylor. Jamari McCullough and Cam Chism might get some PT as well. 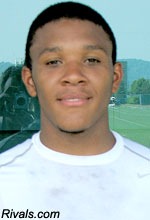 In other news, the Terps landed a new recruit today. Darrin Drakeford, a DC native who plays at Theodore Roosevelt High School, announced his attentions to play for the Terps today, and there's some hype around him. Now, he's only two stars according to Rivals (generally, 2 stars means they haven't been rated, though not always) and three stars on Scout. But the important thing to remember is that this kid is a great athlete - if the coaching staff makes him put in enough time practicing, he could end up as a great linebacker.

And if you think the LB corps is starting to get crowded with this recruiting class, you're right. Drakeford makes it the sixth LB this year, not counting the two DE/LB hybrids. What does this mean? Well, my guess is that the coaching staff ain't too confident with Jelani Jenkins.