Quarterbacks - This might be Chris Turner's best QB'd game all year. Of course, there were some occasional issues. Yes, he put his receivers in positions they didn't particularly need to be in. But more prevalent was his leadership - a quarterback doesn't have to be incrediibly good to do his job; he just needs to be good enough and a leader. Turner was clearly good enough today. Grade: A 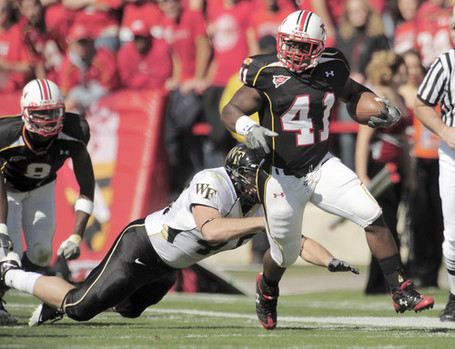 Running Backs - I have to say, the running backs were much less impressive. Da'Rel Scott was average, not including his butterfingers that led to a bunch of fumbles that put the defense in a precarious situation. When he didn't fumble, he was fine, if unspectacular. I was more impressed with Davin Meggett - he needs to get more carries. As a two-star true freshman, the kid averaged seven yards a carry against a good Wake defense. The kid is legit, and runs with a chip on his shoulder. He's what Ii wanted Morgan Green to be. Grade: B

Wide Receivers - About time. This isn't the fault of the wide receiving corps, but the best player on the team, Darrius Heyward-Bey, is nearly always ignored. Turner/Fridge/Franklin looked his way early and often today, and he made good use of it. He made a few spectacular catches, and a nice TD. Then there's Danny Oquendo. He had one of the best TDs I've seen in awhile. No one made any big drops. It was as good as you could ask for. Grade: A

Offensive Line: Good throughout the day. The rule of thumb here is that if you mention them, usually they did something wrong. You didn't hear much about the offensive line - Turner was rarely under pressure, and the holes for the running backs were big enough to gain over a hundred yards - what more can you ask for? Grade: A

Defensive Line: Another solid performance. They were able to consistently get 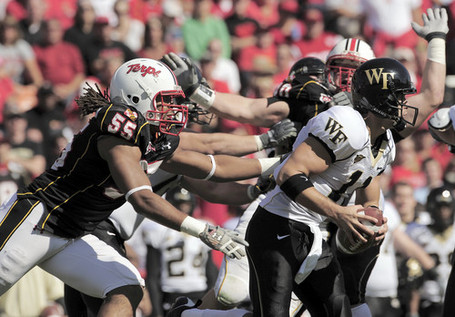 pressure on Riley Skinner, though they missed a few too many sacks for my taste. Where they shined was in the running game, as they limited Josh Adams to just 2.2 ypc. Anytime a team runs it 33 times and only gains about 70 yards, the defensive line deserves some major credit. Grade: A

Linebackers: Similarly to the rest of the defense, a great job. Fokou was great as a blitzing outside linebacker, Costa was surprisingly solid in run defense. Philistin and Wujciak, as always, were consistently making tackles. They were a lot like the rest of the team - solid but unspectacular. Grade: A-

Defensive Backs: Outside of TJ Boldin, no one on the Wake Forest offense challenged the secondary. And then, when they did miss coverage, they got lucky because Wake's no-hands TE would end up dropping it. Considering they did this without Kevin Barnes for half the game, this was a job well done. Grade: A-

Overall Defense Grade: A+ (No, it doesn't add up, but this performance was greater than the sum of it's parts).

Special Teams: Travis Baltz is consistently nailing his punts. Although he didn't have a performance as great as most of his others, it was very solid with a few great kicks. And what can you say about Obi Egekeze? After that terrible start, he's come back very strong and hit four field goals today. Big props, and keep up the good work. Torrey Smith did a good job returning kicks, and is quickly becoming one of my favorite Terps. Grade: A+

Coaching Grade: After the Virginia game, I blamed Fridge and the coaching staff. So now, I take off my hat to them. Every coach did a great job today - both defense and offense were prepared, there wasn't one instance where the team wasn't aggresive, either with or without the ball. It was clear they were pissed off and wanted revenge, which is exactly how they should be. Oh, and DHB got the ball - a lot. I might've given Chris Cosh a lot of flack over the years, but he coached 'em up today. Grade: A+

Overall Team Grade: Yes, things could've been better. Yes, there were some problems - fumbles, anyone? But honestly, I can't imagine giving this team a lower grade after the performance they just gave. Grade: A+